How To Craft Tnt In Minecraft

How To Craft Tnt In Minecraft

Read on to find out how to craft and ignite a TNT block in Minecraft.

In Minecraft, TNT can become a powerful weapon when used correctly. Like in the real world, TNT is a highly explosive device that, when triggered with flame, will create a massive explosion that deals damage to its surroundings. Of course, it is not always fun, and games with TNT can cause player damage if you are not careful enough. But, with the right set of tools, equipment, and knowledge, you can make TNT a potent weapon that will defeat multiple mobs at once. Here is a short guide on crafting, obtaining, and triggering a TNT explosion in Minecraft.

How To Use Tnt

To use a block of TNT, youll need to place it and then prime it. You can place a block of TNT like how you would place any other kind of block item. If you place it and dont like where it is, you can break it with an empty hand or any non-flaming tool to pick it back up.

There are multiple ways that you can prime a placed block of TNT. The easiest and most common manner is to use fire in some way but there are also other methods. After you prime the TNT, it will turn from a block into an entity and can no longer be picked up. When a block of TNT is primed, it will flash white for a few seconds before exploding.

Use The Redstone Torch To Light The Tnt

How Tnt Works In Minecraft 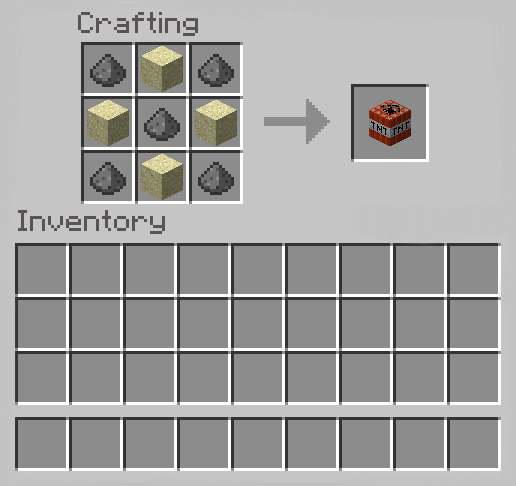 TNT is an explosive block in Minecraft that destroys itself and blocks around it when activated.

These blocks can be crafted as well as found naturally in the world, usually in structures like Mineshafts or Desert Temples. Theyre useful, but can also pose a threat as they can inflict damage to the Player and other Mobs.

TNT can also be activated by explosions from other TNT blocks or Creepers, by spreading Fire or Lava, as well as Projectiles. Finally, it can be activated by being shot out by a Dispenser, which is one of the ways of launching and activating TNT.

You can also play around with Bow Enchantments because they can also ignite your TNT from a distance.

There are many different designs for a TNT launcher. You can have them wide or long, big or small. There even exist designs for flying TNT bombers.

Though, when deciding on the size of your launcher, do keep in mind just how much TNT you wish to be launching out and at what rate. Too much TNT being exploded is a notorious way to instantly crash your game or computer.

If your TNT launcher is causing issues with game performance, do try checking and changing your tick speed to help.

So, for the sake of my framerate I will stick to a simple design. From this you can get a hold of the basics and then expand on it if you wish, using more complex Redstone circuiting.

For this design you will need:

This will be a manual launcher, but using a few more Repeaters and some Redstone Dust you can also switch it to automatic and save yourself the additional effort.

We will start by putting down our Redstone Repeaters one block apart from each other, facing in opposite directions. Put your Dispenser between them, facing upward.

The Repeater on the right you will need to put on four ticks, and the one on the left on two ticks. This will cause a long enough delay between the Pistons moving to launch the TNT.

How To Make Underwater Tnt In Minecraft Education Edition

Minecraft Education Edition offers players the chance to do a lot that they otherwise cannot do in Minecraft. Bedrock Edition has education capabilities that allow for many of those education-specific activities.

It’s certainly not the same as Education Edition, which is free for teachers and students with an Office 365 account, but it does offer some really interesting possibilities.

One education-related thing Minecraft Education Edition and Bedrock users can do is create underwater TNT. In Minecraft, TNT does not explode in water.

TNT is foiled by water as it will extinguish the flame that eventually causes it to explode. It’s a perfect way to avoid accidental explosions, but underwater TNT is unavoidable. Here’s how to craft it.

I am browsing the Minecraft Wiki because I am bored. There is underwater TNT apparently? I’m profoundly confused about how this works but I would like to get my hands on some.

You May Like: How To Get Bonemeal In Minecraft

How To Make A Tnt Cannon In Minecraft: 11 Steps

Here, we will go through step by step with pictures to build a working TNT cannon in Minecraft. Shall we start?

What is TNT in Minecraft?

As known in every game, TNT is an explosive material that causes an explosion in a particular area. Similarly, in Minecraft, TNT is a blastic weapon that you can use for massive destruction and bringing down big hills quickly. If you want to make a base or something, but there is a mountain blocking it, you can use TNT. Making TNT isnt that hard.

How to make TNT in Minecraft?

Move The Tnt To Inventory

Minecraft – How To Make TNT In Minecraft

After getting TNT by doing all those instructions up above, now you get the item you want. Complete the process with doing the last important step.

See Also : How to Make Rails in Minecraft

Now you need to move that new item to your inventory to keep it safe. Anyway, this item may be required to make other items which is the basic materials coming from it.

Anyway, the various items available in Minecraft sometimes can give you chance to make some fun. One of the amusing items is TNT which is a block that can explode shortly after being ignited.

If you have no idea how to make TNT, just try to follow instructions about how to make tnt in Minecraft we explained up above.

Read Also: How To Get Mods On Minecraft Nintendo Switch Edition

Command To Get Unstable Tnt

Unstable TNT can be got using a command in creative mode. This requires:

You can also specify the number and who unstable tnt will be given:

Finish Off Crafting A Tnt

You can also find TNT generated naturally in the Desert Pyramid or Woodland Mansion. They contain 9x and 2x TNT blocks respectively.

Where To Get Sand 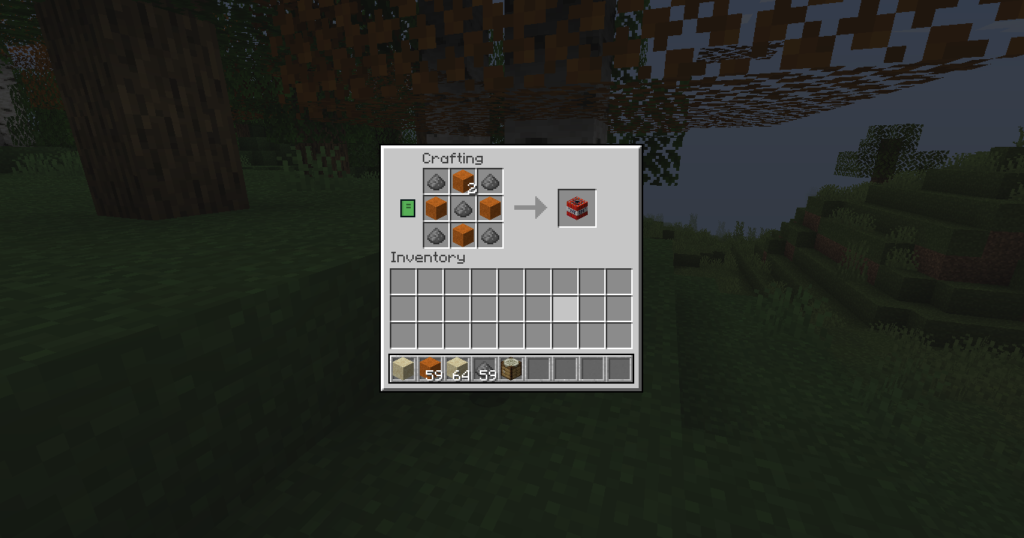 This type of block is found near water, such as around lakes and rivers. Furthermore, it can be found in desserts that stretch across the land. Red Sand, however, can only be found in the Badlands biome.

You can mine Sand the fastest with shovels, so bring a few of those kinds of tools when harvesting. Be wary that Sand is affected by gravity and will fall if the block below it disappears. If a column of Sand falls on top of you, it can suffocate your character.

How To Make Tnt In Minecraft Without Gunpowder

We cannot craft TNT without gunpowder. We always need gunpowder to make TNT in Minecraft. But TNT can be naturally generated in shipwrecks. It is found along with the treasure that are present in shipwrecks. There is a high chance of finding TNT as treasures in desert temples. You have to break the pressure plate in the buried treasure room so that you can acquire TNT as treasures.

How Do You Enable Tnt In Minecraft

TNT is activated by Redstone.

It will turn on when it is energized by the button, lever Redstone torch, button or pressure plate as well as any additional activators.

Once you have activated the TNT youll notice it appear slightly before it will start to flash.

After about three seconds, it will go ablaze.

It is also possible to light TNT using flint and steel.

Just place the TNT on the table and then right-click it using the steel and flint to ignite it.

TNT can also be lit when there is an open flame near.

Be aware of placing it close to lava.

Do not put TNT in areas that have a fire, except if you want to ignite it.

The TNTs explosion could also cause light to be reflected off TNT in the vicinity.

If other TNT-based blocks fall located within the vicinity of the one which explodes, the other will also light up and explode.

How To Find And Build A Crafting Table

Minecraft : HOW TO CRAFT TNT SWARD

To build a crafting table, you first need to place four wooden planks in the 2×2 grid, which you found after following the steps mentioned above. After that, you will have an option to choose from a variety of wooden planks present on your screen.

The next step includes collecting gunpowder and is believed to be a little harder to obtain than any other item in the game. According to some players, the easiest way to manage the same is by killing the creepers. They will explode after killing the creepers, and gunpowder will fall from them.

To kill any mob or creepers, you can use the swords present in the game, which will help you to clean your opponent effortlessly. Following are some of the best swords you can use to kill the creepers:

Also Check: How To Make Maps Bigger In Minecraft

How To Make Special Tnt In Minecraft

How To Ignite Tnt In Minecraft

There are a few ways on how to ignite TNT in Minecraft. The standard ways of igniting a TNT block and triggering an explosion are Listed below.

S For Making The Tnt Cannon In Minecraft

The Materials required to make TNT cannon are 20 solid blocks, about 8 TNT per shot, 1 slab, a bucket of water, some temporary block, Redstone dust, and 4 Redstone repeater.

Leave one gap and place another 9 blocks horizontally. Put a block in the gap. The gap which is not closed is the direction the TNT cannon will be facing.

Now you need to put a block in the middle here. The dirt is a temporary block that you can break after placing the solid block.

After that, take a bucket of water and pour it below the solid block you just put- If you put it correctly, the water will reach the end of your canon.

Then put a slab at the last block where the water stops flowing.

To fire a Minecraft cannon, you will need a lever or a button, so place a lever at the back of it.

Now in the side where you didnt put Redstone dust on 2 blocks, place 2 stone blocks, then add Redstone on top of them. Then place TNT on top of the slab. 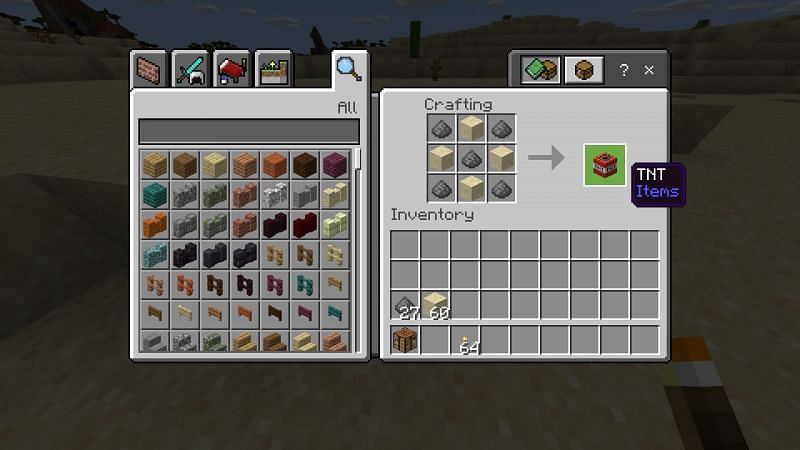 Don’t Miss: How To Make Path In Minecraft